A few days ago I came across this photo that had been posted on the The Chirurgeon’s Apprentice Facebook page, run by Dr. Lindsey Fitzharris. It was captioned, “A skeleton of a mother, and her baby, who both died during her pregnancy.” 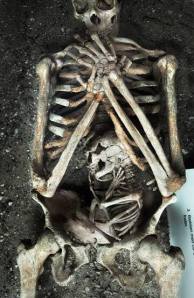 The photo in question – is this real or a replica?

Now, something about this photo immediately struck me as… off.

Therefore, in a similar vein to Dr. Kristina Killgrove’s ‘Who Needs an Osteologist?’ series over at Powered by Osteons, I’d like to welcome you to this little feature – Real or Replica?

Why? Because this photo isn’t real. Or rather, while the photo might be real – it’s not of a real burial, but rather a replica of a (perhaps real) burial.

I mentioned this in the comments of the post, which I ended by saying, “It’s a good replica, but not entirely realistic (shan’t list issues unless you ask).”

I therefore give to you, my reasonings for coming to this conclusion:

The reasoning for this in a replica? I can only assume that it makes it easier to demonstrate their point, without all of the bones from the two different skeletons being all jumbled up together.

The reasoning for this in a replica? It’s a lot more moving if the skeleton of a neonate looks like a recognisable child. Instead of say this: 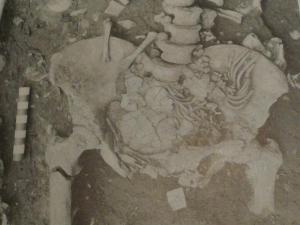 A neonate (full term fetus) within the abdominal cavity of an adult female (head already engaged, meaning the individual had turned in the womb prior to death). [From Museum of London, hover over for link.]

The reasoning for this in a replica? It looks nicer.

Oh, and then there’s this:

Right, so the above list is not exhaustive, although I am exhausted. If you’ve noted anything else supremely obvious (to the eye of an osteologist) hit me up in the comments. Excavating skeletons (or rather, supervising the excavation of skeletons) is tiring work… satisfying, but tiring.

[For the record, I did try to reverse image search the photograph when I first came across it. Initially I didn’t come up with much… however I have just found a related Reddit thread. It seems that perhaps this is a replica slash (peculiar) reconstruction from Æbelholt Abbey, in Denmark. Maybe it’s a realplica? Can that be a thing now? Because I think it might need to be.

Is anyone up for some translation? I’m currently too sleepy to type that interpretative panel (from the ‘more photos’) into Google translate. I will do it soon if someone’s doesn’t get to it before me.] 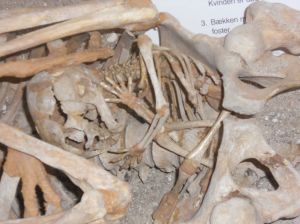 Is that like… modelling cement sticking actual human remains back together?

If you’re interested in reading more about childbirth and female fertility in the archaeological record, you should check out Katy Meyer’s post over at Bones Don’t Lie – it’s a great introduction to some areas of this subject and it even links to a brilliant paper on an Anglo-Saxon neonate/adult burial.

The students at the Poulton Research Project, where I am currently supervising, have been working on a double burial this week (an adult and a neonate). If you’d like to follow the excavation, check out my weekly update this weekend (which will be cross-posted here) or you can search #PoultonProject on Twitter.

3 responses to “Real or Replica?”