“The Lord have mercy on me! What will my poor children do?” — Edward Jordan, upon facing capture 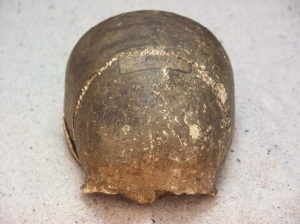 The remains of Edward Jordan, handily labelled ‘Pirate’, so you know it must be true!

Edward Jordan was described as being a man of “engaging appearance… His face was innocent and unlined, in spite of his thirty‐seven years, and he had a fresh, ruddy complexion, jet black hair, dark brown eyes, strong white teeth and an open hearty laugh (Stairs 1962:28).”  Jordan was a ‘Black Irishman’ originally from County Carlow, Ireland.  He had been involved in the events that prepared the way for the Irish rebellion of 1798.  During the rebellion he was captured, tried, and sentenced to death; he managed to escape, only to be caught again.  Turning informer, Jordan received a King’s Pardon and married, but was forced to flee Ireland when his past contacts discovered his betrayal.  He and his wife Margaret landed in New York in 1803, moved to Montréal, Quebec, and finally to Gaspé, Newfoundland where he settled as a fisherman with the help of a creditor.  The heart of Jordan’s livelihood, as a fisherman, was his schooner Three Sisters, named for his three young daughters at the time.  However, distressed by consistent bad luck, Jordan fell into debt with his creditor and sought help from Halifax merchants J. & J. Tremain (Stairs 1962).

After a series of more woeful events, Jordan eventually became indebted to J. & J. Tremain.  In late 1809 Captain Stairs was sent by these Halifax merchants to retrieve the 1000 quintals (1 quintal being approximately 100kg) of fish promised by Jordan to repay his debt.  Once in Gaspé, Stairs instead found only 100, not 1000 quintals and was forced to take Three Sisters from Jordan to repay the debt.  Still, Stairs offered Jordan and his family passage to Halifax aboard their ship, where he might find employment more easily than in Gaspé (Stairs 1962:28). On September 10th, 1809 Three Sisters sailed for Halifax with Captain Stairs, three crew members (John Kelly, Tom Heath, and Ben Matthews), Edward Jordan, his wife Margaret Jordan, and their four children (Howell 1995:8).

Three days later on September 13th, Jordan pulled out a pistol and shot at Captain Stairs but missed and killed Heath, standing next to him.  A conflict immediately arose pitting Jordan and Margaret against Stairs and Matthews.  It was reported that throughout the entire struggle Kelly continued to navigate and steer Three Sisters.  Jordan, with the help of Margaret, killed Matthews.  After being wounded, Stairs jumped overboard.  Jordan insisted on changing course to “make sure that John was finished” (Stairs 1962:30). Kelly refused, stating that it was unlikely Stairs would make the swim back to shore in the running sea and that were they to bring the ship around it would be difficult, if not impossible, to locate Stairs in the bad weather that was coming up around the schooner (Stairs 1962:30).

Jordan, his family, and Kelly sailed to Newfoundland with plans to hire a crew and continue on back to Ireland.  A schooner heading for Massachusetts, however, rescued Stairs. He then made his way to Halifax, where he reported what had occurred aboard Three Sisters.  The British Consul circulated a description of the ship all along the Eastern coast.  The instructions to all legal authorities were to “arrest Jordan and Kelly, whenever found, on charges of piracy and murder” (Stairs 1962:31).  The reason Jordan was charged with piracy and not mutiny was that he was technically a passenger aboard the ship and not a crewmember, though it made little difference as the penalties for both was the same: death.

Once the news of the crime reached the city of Halifax, a reward of £100 was offered for the capture of “the pirate Jordan” (Stairs 1962:32).  Cruisers were sent out of Halifax Harbour to run down Three Sisters.  She was eventually captured by the schooner H.M.S. Cuttle in Bay of Bulls, Newfoundland (Howell 1995:8).  Although Jordan and his family were determined to make their way to Ireland, all were brought to Halifax.

The Court of Admiralty held the trial under the Acts of William and Mary.  Jordan was convicted and sentenced to be hanged. His wife, Margaret, was discharged, as the court felt she had acted out of “duress or fear of her husband” (Stairs 1995:9).”  Jordan was executed on November 23, 1809 “on [the bea]ch near Freshwater/ [Bridge] Halifax, being hanged from the neck until dead.  After execution, his body was tarred and gibbeted, or hanged in chains, in Point Pleasant Park at Black Rock Beach near Steele’s Pond” (Conlin 2007:1).

Harsh laws developed during the Golden Age of Piracy (1690‐1750), such as the British Piracy Acts that required the bodies of executed pirates to be displayed in public as a warning to other mariners.  The same year, the Royal Navy had gibbeted four or six mutineers on McNab’s Island at Mauger’s Beach (Hangman’s Beach), just across the Harbour from Black Rock Beach (Conlin 2007:1).  Any ship entering Halifax Harbour in 1809 faced a gauntlet of rotting corpses as their welcome to Halifax.  For those citizens of Halifax who walked through Point Pleasant Park, the sight of Jordan’s corpse would have been an unavoidable one, as it was located just beside the main road.  It remained there for over three decades, slowly deteriorating, dropping into the sea, until only the skull remained.  In 1844 the skull was collected from Point Pleasant Park and ultimately it was given to the Nova Scotia Museum (NSM).  In 2007 it was on display at the Maritime Museum of the Atlantic (MMA) as a part of their Pirates: Myth vs. Reality exhibit.

In the next few posts I’ll be writing about the portrayal of Edward Jordan as a “typical, violent but short-lived, pirate of the 19th century” and the gruesome practice of gibbeting, both of which important features in the story of Edward Jordan’s life after death.

One response to “Edward Jordan: A Fate Worse Than Death”