A few weeks ago I presented at the British Association for Biological Anthropology and Osteoarchaeology (BABAO) Annual Conference in Sheffield. Rather than present on my PhD research, as I’ve done in past years, I instead focused on another subject that interests me: best practice in digital osteoarchaeology.

I’ve been interested in this subject, especially since I started blogging, and I got an opportunity to explore it further following a TAG presentation at the end of last year on Digital Public Mortuary Archaeology by Howard Williams, who asked if I would co-author a paper on the subject. This paper is forthcoming in Internet Archaeology, in an issue that will include other papers from the TAG session OK computer? Digital Public Archaeologies in Practice.

From my point of view, one thing became very clear when writing this paper: there is a distinct lack of guidance for digital practices in osteoarchaeology and related disciplines, especially where ethical considerations are concerned. 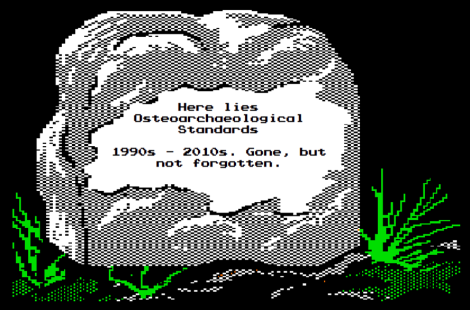 Okay, so maybe this slide was a bit dramatic…

Now, I am by no means the first person to notice this. However, after discussing the matter with colleagues and peers earlier this year, I decided to take it to BABAO in order to raise it to the wider community. I presented examples of digital projects and some of the issues that have been encountered by the people working on them. What follows is a rough summary of what I discussed, although I’ve adjusted it a little for the blog as my presentations are largely visual.

The issues largely fall into one of two categories: the collection of digital data from osteoarchaeological contexts and the dissemination of that data.

One of the main issues for the collection of digital data is a lack of standards for the methods being utilised. This impacts everything from the database fields used for comparative collections to producing evidence that is admissible in court. Some people are starting to work on this issue, especially with regards to the reproducibility of results from specific methodologies. But as this comic from xkcd illustrates ever so well, digital practitioners need to start talking to each other now – at the beginning of the process – to limit the difficulties we’re going to face in the future. 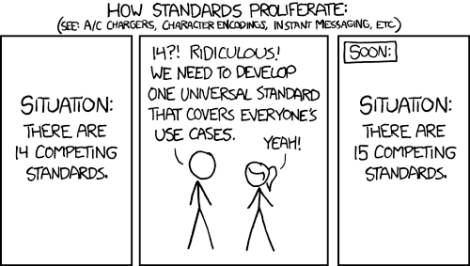 Another issue that has been raised by many non-osteoarchaeologists before is the matter of long-term storage and the retrieval of data. I chose not to say too much about this, as it’s possibly the best recognised issue, and one that is better covered by others.

But perhaps the most important issue facing digital osteoarchaeology is not only WHY we’re using these methods (often they’ve already been justified for scientific purposes, largely because of the cost), but the fact that we’re continuing to do so without really discussing the potential ethical impacts of our work. 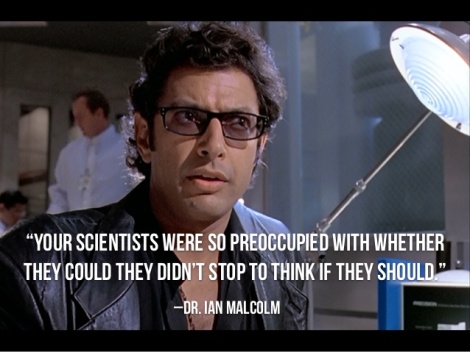 When it comes to the dissemination of this data, it is largely done for two reasons: sharing with academics and sharing with other people (although of course these can often overlap).

One area of this that I didn’t cover at all was blogging, since this has been discussed previously in publications (see Bones, Bodies, and Blogs: Outreach and Engagement in Bioarchaeology and Blog Bodies in Blogging Archaeology for examples). As a result it has had the most critical evaluation thus far, both the writing and accompanying visuals.

Most people who’ve launched digital based projects have in some way or form adapted pre-existing guidance and policy documents. See here two examples, from Anthronomics/Dactyl (which mentions the BABAO guidelines) and also Digitised Diseases (which mentions restrictions as a result of the Human Tissues Act, which covered the Royal College of Surgeon collections).

Museums are similar, using and adapting their own pre-existing policies, or – as in the case of the developing Natural History Museum digital database projects – also creating new specific procedure documents, often due to their unique constraints.

These projects (and others like them in the US, Canada, and Europe) shows there is a need for these already existing guidance/policy documents to be formally amended – otherwise there is the potential for multiple adaptations and interpretations as to how they relate to digital media.

Some of the other issues relate to access. Both, what is acceptable or is expected to be made publicly accessible, legally and ethically? Many researchers who are digital practitioners aim to be open with their data and publications; however this can sometimes be made more complicated due to the nature of the content. Many of the issues that arise in physical osteoarchaeology, are still present in digital osteoarchaeology, such as those concerning different stakeholder groups like indigenous communities and groups involved in repatriation and reburial requests.

Of course in all of this, 3D scanning/printing has certainly dominated the discussion thus far, likely and somewhat ironically because it is the most tangible of all the digital formats. Although there are other aspects of digital osteoarchaeology that we need to include in the discussion: everything from YouTube videos to apps, I expect that 3D scanning and printing is what’s going to be at the centre of the discussion (and forthcoming edited books suggest this discussion is coming soon).

One issue that I am really interested in, which relates especially to 3D scans and prints, but is relevant for all digital data created from osteoarchaeological contexts is the matter of ‘authenticity’. This is something that was discussed at EAA and often seems to be at the root of many issues that people are encountering.

By this point at BABAO my time was nearing an end (and similarly I don’t want this blogpost to drag on forever) so I ended with some questions, to hopefully kick-start a discussion:

Are these things we create representations or reproductions?

When we repatriate physical remains, do we need to repatriate scans, photographs, 3D prints?

Likewise, are there similar constraints on displaying these objects – either digital or digital made analogue (e.g. 3D printed)? They can certainly have similar emotive power, but are they less subject to the ethical considerations?

Do we have a responsibility (going back to standards here) to ensure scientific accuracy (e.g. as close to the real thing as possible) – or to make it clear where they are not accurate (e.g. where there are point cloud gaps that we’ve filled in)?

There are oh so many more… but you get the idea!

The matter of a lack of guidance is on the radar of various organisations (AAA, SAA, AAPA, CAS) and individuals; I raised it at BABAO, because I think it needed to be on ours too.

However more importantly, I think that we all need to be discussing this matter with each other. Therefore, I ended by talk at BABAO by asking who wanted to start a working group.

Remembering of course, that whatever we create… 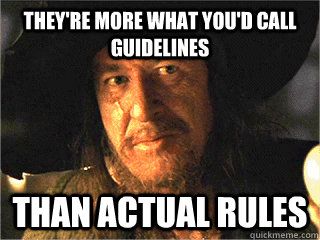 This suggestion to start a working group was well received and so based on the feedback from people at the conference, I have gone ahead with what is hopefully the first step, which is detailed in A Working Group for Best Practice in Digital Osteology.